While mass shootings have happened all over the globe, they are a particularly American phenomenon. Whatever the reason for the shootings — lax gun laws, mental illness, friends or family who know someone may commit a mass shooting but fail to speak out — the term “active shooter” has become a phrase that strikes fear into the hearts of people from coast to coast.

While experts and police officers sometimes disagree on the definition of a mass shooting, in most cases, it represents an event where one or more individuals shoot and kill at least four people. Today, it may seem strange to think that before Aug. 1, 1966, there had only been 25 such occurrences in the history of the United States. On that summer day, Charles Whitman went to the observation deck of the Texas Tower at the University of Texas, opened fire and killed 17 people before police eventually took him out.

There was a time when many Americans thought an active shooter incident could never happen in their community. Almost no one believes this now. Newtown, Charlotte, Orlando, Washington, San Bernardino, Los Angeles, Pittsburgh, Virginia Tech, Parkland High, Sutherland Springs, Aurora, El Paso, Columbine — there hardly seems to be a corner of America unaffected by a mass shooting.

In August 2019 alone, 53 people died in mass shootings, according to The New York Times. In 2017, Every Town for Gun Safety reported that between 2009 and 2017, there were at least 173 mass shootings in the United States, with 2017 being the deadliest year ever. In that time, 1,001 people lost their lives, while 792 others received gunshot injuries. One in five victims was a child under 18.

Statistics show 96% of mass shooters were male and 60% were white.

Do you know how to prepare for an active shooter? We now know these tragedies can occur anywhere, and if your organization hasn’t done so yet, it’s time to think about preparing for and responding to a growing threat.

What Do Active Shooters Have in Common? 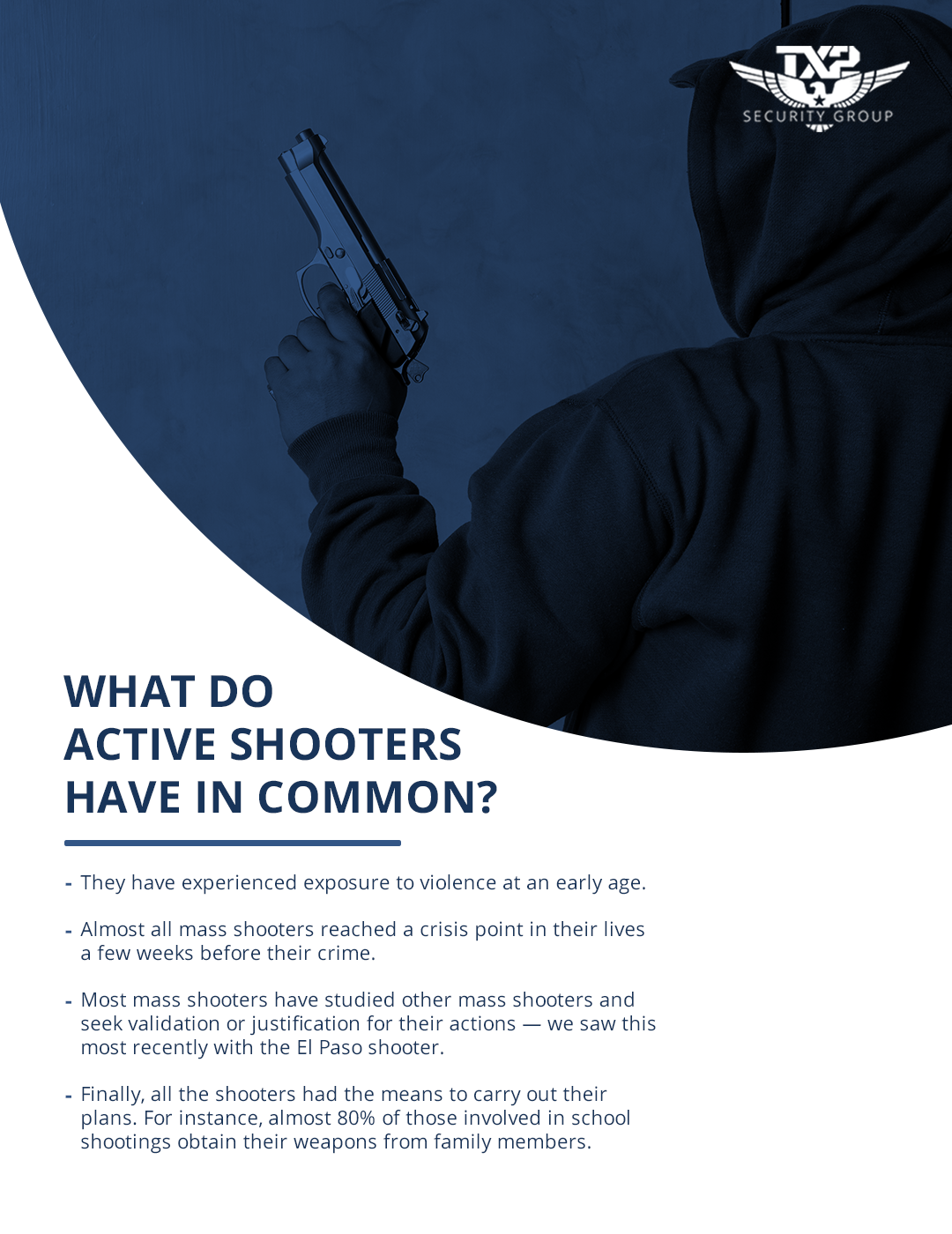 According to statistics compiled by the Violence Project Mass Shooter Database, most mass shooters have four things in common:

Where Do Most Shootings Occur?

Mass shootings only comprise a small number of firearm deaths in the United States every year. However, the public nature of the shootings makes them stand out much more.

Without a doubt, the mass shootings that draw the most attention occur in religious institutions or schools. The Nov. 5, 2017 attack at First Baptist Church in Sutherland Springs, Texas, resulted in the death of 25 people, including an unborn baby. In 2018, the mass shooting at the Tree of Life synagogue in Pittsburgh left 11 people dead and another 29 injured.

As horrible as these shootings are, most mass shootings take place away from these locations. Mass shootings have occurred in movie theaters as in Aurora, Colo., nightclubs and entertainment districts in Orlando, Fla. or Columbia, Ohio, concerts like the Route 91 Harvest Festival in Las Vegas, a gaming tournament in Jacksonville, Fla., or a local paper’s newsroom in Annapolis, Md.

Businesses regularly experience shootings. According to a recent FBI report, 40% of active shooter events between 2000 and 2018 took place in a business location. Mass shootings have occurred at IT operations, convenience stores, supermarkets, temporary agencies, assembly plants and even law offices, to name just a few places. These examples point to the pressing need for businesses and organizations of all kinds to create an active shooter plan.

1. It Can Happen Anywhere

People within your organization or community must understand an active shooter incident can happen in your hometown. You are vulnerable whether you live in a large city like New York or Los Angeles, a midsized city like Pittsburgh or Austin or even a small town like Sutherland Springs, Texas, Newtown, Mass. or Roseburg, Ore.
When people stop thinking, “It can’t happen here,” they will be more willing and cooperative when creating a useful active shooter preparedness plan.

Think about the organizations and agencies within your community that would be involved if an active shooter situation occurred. Hospitals, public safety officials, law enforcement, the media and emergency response agencies all play a role.

If and when an active shooter event happens, the time you spend building these relationships in planning with these groups will be invaluable.

It’s essential to cast a critical eye on the resources available to help you in the case of an active shooter. In most mass shootings, fatalities and casualties number in the double digits. If your local community only has two or three ambulances, you need to consider where other EMS units will come from.

It may be necessary to reach out to officials and agencies in nearby towns who will need to respond if an active shooter situation occurs in your community. Keep the names and phone numbers of the individuals you need to call in this situation on hand at all times.

4. The Importance of Rapid Medical Aid

In most active shooter incidents, law enforcement responds within three to five minutes. Within the next five minutes, the shooter usually either commits suicide, surrenders or gets killed by police. There can be a lot of casualties in those 10 minutes, so you need to develop a plan to treat them medically sooner rather than later.

Work with local law enforcement and EMS providers to develop an active shooter protocol that will provide aid to victims as quickly as possible. It’s no longer enough to let people sit in a safe staging area away from the hot zone for minutes or hours. When you develop an active shooter protocol, law enforcement and EMS will know where to go immediately to treat victims.

These are just a few of the things you can do before you develop an actual active shooter plan for your location, but they may be among the most critical.

Building on the steps taken above, every organization should create an active shooter response checklist specific to their location. The Department of Homeland Security recommends the “Run, Hide, Fight” protocol, but experts say this requires taking a realistic approach. For instance, 90% of the Run, Hide, Fight shooter plan should be running. However, this depends on the layout of your facility.

When you’re creating an active shooter response plan, here are some of the steps you should take.

1. Survey Your Facility to Create the Best Emergency Escape Procedures

Imagine an active shooter has entered your location. What should your employees do? As part of your plan, have someone role-play an active shooter and see how people respond. Do they know where the exit doors are? Or the best hiding places? Incorporate all these findings into your plan and distribute it widely, so all employees know the best places to hide or ways to leave the building in case of an active shooter incident.

During active shooter situations, providing people with clear instructions and accurate information can save lives. The faster you notify people about the shooting, the more you will increase their chances of getting to safety.

Establish straightforward, easy-to-understand guidelines. Notification should be multilingual and take into account the needs of the hearing- or sight-impaired. Text notification may be the quickest way, but accompanying text with the use of lights or sounds is also appropriate.

When you are thinking through what to do in an active shooter situation, consider the fact that many active shooter incidents begin outside a building or facility. You should also develop an effective lockdown plan, so as soon as people become aware of an active shooter outside, you can lock down the facility.

If the shooter enters the building, your plan should include the best shelter sites. Locations with thick walls, minimal interior windows, thick, solid doors that lock and access to communication devices like telephones offer the most protection.

Most businesses designate two or three individuals to be the point people during an active shooter situation. These people must have information on how to contact all relevant agencies. This information should include names, telephone numbers and even how far away these agencies are from their location.

Proper distribution of this information allows people to respond quickly and efficiently at a time when seconds may mean the difference between life and death.

Many years ago, during the era when Americans were worried about a nuclear strike by a foreign power, schools would hold exercises where students would hide under their desks. Today, schools have replaced those exercises with active shooter drills.

While it may seem heartbreaking to many people that young children would have to engage in these activities, they work. Already, there have been several occasions where students and teachers who have received active shooter training have responded in time to prevent an incident from occurring in their school.

It’s the same with your business organization. Continuous training involving all employees means they will have access to the most up-to-date information and resources. Training should not only include internal active shooter drills, but should involve supplementary support such as videos, newsletters and exercises conducted with local emergency organizations.

When your organization begins the process of developing an active shooter plan, many experts recommend working with an established security firm. In 2007, two former Texas state troopers created the Tx2 Security Group because they saw the need for a disciplined, highly trained and experienced investigative and security operation. Tx2 provides comprehensive and intelligent security services for educational, business and corporate locations, as well as developing top-flight security plans for organizations holding indoor or outdoor events.

If you are concerned your active shooter plan is inadequate or has gaps, Tx2 will work with you to fill them. We can help you create a solid plan and arrange for active shooter training for your employees so they will be ready in case of an event. We can also help by providing ongoing security for your location. Shooters are less likely to act if they know armed security staff are protecting the building.

If you would like to talk to us about creating an active shooter plan or how we can help you with your security needs, call us at 512-256-4952 to arrange a free consultation. You can also visit our contact page to explain your security needs in more detail.